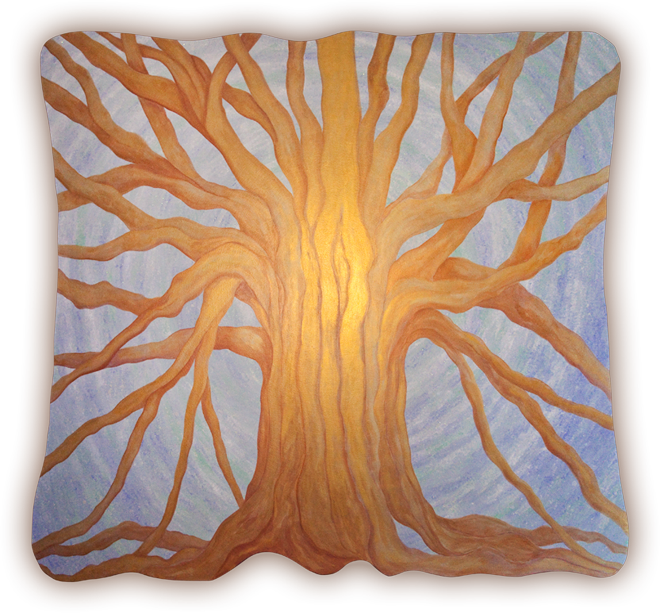 Golden Lifetree is a worldwide non-profit art project for peace which creates a connection through art to the soul. The Caravan of the Golden Lifetree moves around the world and stops in different countries. With various exhibitions and events it creates a platform for people to meet each other and nature freely and blissfully anew for a harmonious and conscious living together on planet Earth.

…to the Garden of the Golden Lifetree! 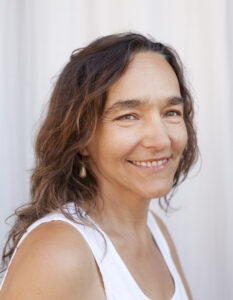 Golden Lifetree is a non-profit project

A cordial thank you to all those who support this project with their contribution of any kind.

As the Golden Lifetree grows, so does this website and constantly brings forth news, changes, blossoms and fruits.

If you wish you can view a short presentation of the project as an online magazine to leaf through , visit a Digital Holographic Exhibition and listen how the project came to this world… 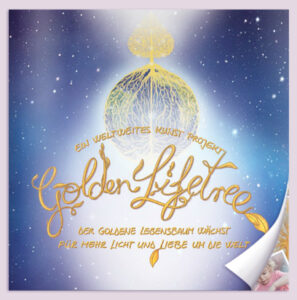 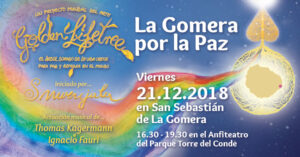 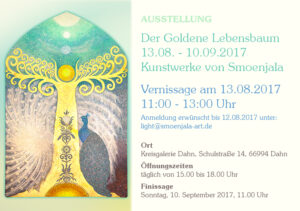 “Silent Journey”, May 2017
from La Gomera to Hungary 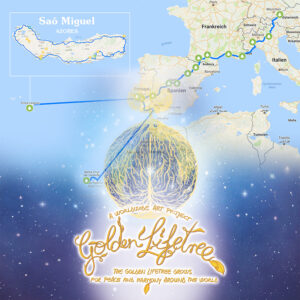 This year again, Smoenjala is on the road on her lightful mission. The current route started on La Gomera, the birthplace of the Golden Lifetree, and leads to Hungary via Portugal and the Azores island of Saõ Miguel, Spain, France, Italy, Austria and Germany. Many new trees lie on this route and expand the network..

You can follow the current journey at the BLOG 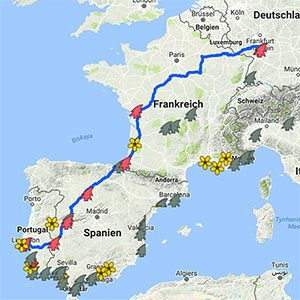 Once more this year Smoenjala starts to a new route of the healing “Silent Journey” with the Caravan of the Golden Lifetree.

You can follow the current journey at the BLOG

“Silent Journey”, April – June 2016
from La Gomera to Heidelberg
Follow the current journey at the BLOG 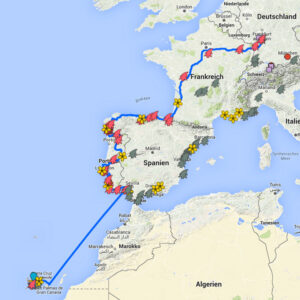 Smoenjala starts a new stage of the Caravan of the Golden Lifetree. The light~work with trees and places continues and so the building and strengthening of the Golden Net of Universal Love around the world. “Silent Visits” in deepest contemplation will take place again on this trip held in honour at major Tree-Beings. In this way, new places of power of the Golden Lifetee arise on the path the caravan, which are obtained through the trees. 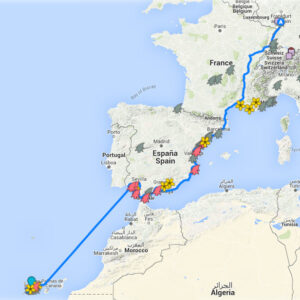 2015 is a moved year and Smoenjala started on the 29th of November with the Golden Lifetree again for a special trip ~ the “Journey of Silence”.
On this journey in deep contemplation Smoenjala will continue the light~work with trees and places. Partially she will meet already known trees again, but new trees also will be honoured with “Silent Visits“. In this way, new sacred places of power of the Golden Lifetree emerge on the path of the Caravan of the Golden Lifetree , which are obtained through the trees. So the Golden Network of Universal Love continues to grow around planet Earth.

Caravan of the Golden Lifetree
from Budapest to La Gomera ~ and back!
January – April 2015 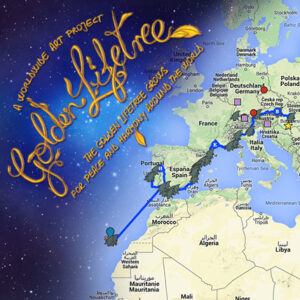 After a preparatory phase the the Caravan of the Golden Lifetree starts the next stage on 14th of January 2015. The route flows from the Hungarian capital Budapest, through Vienna, passing the Chiemsee down to Italy and along the coast of France, Spain and Portugal. Finally the Caravan moves with the ship across the Atlantic Ocean to the Canary Islands of Tenerife and onwards to the birthplace of the project to La Gomera. There Smoenjala will pick up the “Holographic Paintings” and transport them safely to Europe so new exhibitions, events and festivals can be organized.
On the route of the caravan honorable Silent Visits to old, large and important trees will be made. Wherever it is possible meditations with the trees will take place in order to strengthen their original healing powers again. Everyone is invited to participate – whether connected personally on location or spiritually from distance, at the proposed time, or in a silent moment.
Please visit the BLOG and route map to follow the activities of the caravan and see the event calendar for upcoming dates. 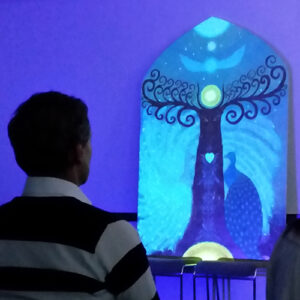 Everything is energy, sound and vibration … said the great scientist and inventor Nikola Tesla

Smeonjala will be presenting the Golden Lifrtree project and Healing Art in Bregenz on the congress for New Energy Technologies organised by Jupiter Verlag since 1988! We feel honoured to be invited and share the vision with the world on this scientific platform. For this occasion we prepared a new informative and beautiful video, which soon we be open to the public and you.

A room full of harmony and peace will be arranged, where the participants of the congress can betake themselves on a “Transcendental Journey into the Golden Lifetree” (audio-visual journey) and recharge their capacities of Free Energy… 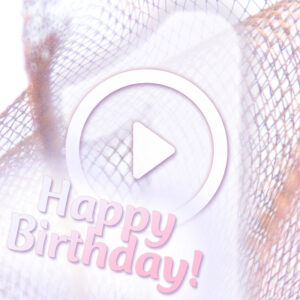 For the 1-Year-Anniversary several little videos have been published… One of them shows the “Holographic Healing Paintings” of the exhibition 2013 in San Sebastian de La Gomera. The other features the beauty of the Golden Lifetree Sculpture of La Gomera – a donation from Smoenjala honouring the island and her people. The third takes you on a Silent Visit to the forcegiving Erica tree, where a Lifetree painting of pure gold is given back to Mother Earth in deep humility and gratitude.
Be welcome to visit Smoenjala’s YouTube Channel and share the treasures with your loved ones if you like. Subscribing to the newsletter will bring you regular meditation-invitations and the latest news into your email post box. 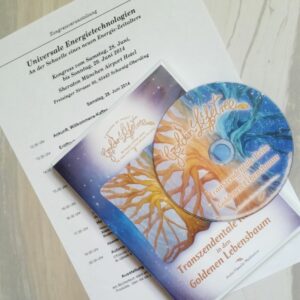 Initiator Smoenjala and team present the worldwide art project Golden Lifetree and Healing Art of the New Age during the Congress for Universal Energy Technologies. Interested people have the opportunity to betake themselves on a “Transcendental journey into the Golden Lifetree” ~ a special audio-visual meditation journey through the painting of the Golden Lifetree accompanied by it’s own unique symphony. This music was derived through a special technique directly from the painting.
In a room full of harmony and peace, the participants of the congress can relax and receive information about the project…

Initiator Smoenjala and the Golden Lifetree team present the worldwide art project Golden Lifetree and the Healing Art of New Age at the Fair for health, vitality and new ways of healing “aktiv + vital” in Dresden.
People are welcome to meet Smoenjala and encounter her Healing Paintings, to commission or purchase an original artwork or take home some artful postcards and information. 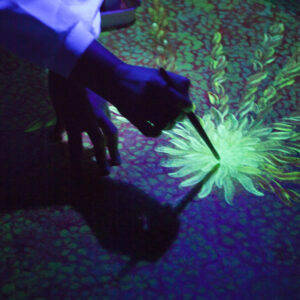 After the seed of the Golden Lifetree has been planted on the island of La Gomera and the seedling started to grow and spread it’s energy around the world, Smoenjala and the Golden Lifetree team are nourishing it now from Hungary.
Here Smoenjala is working on Personal Healing Paintings and new “Holographic Lightpaintings” for the next Exhibition.
The team is reorganising, planing next steps and events, designing attractive informational leaflets, keeping it touch through social networks and sending out letters to support growth and evolution through meditation and contemplation. 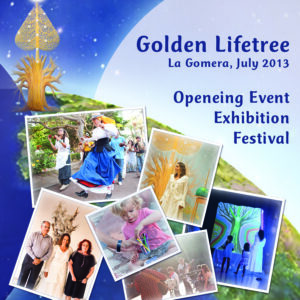 Opening of the worldwide art project Golden Lifetree
The first step of the Golden Lifetree project on this planet was set in motion through the opening event on the island of La Gomera, followed by a three-day festival, a one-month exhibition and symbolic “planting” of a Golden Lifetree sculpture inside the government building of La Gomera, being received by the President Casimiro Curbelo in a ceremonial handover.